‘The Digital Marionette’ is a collaboration between Dr Donna Hewitt, Dr Paul Smith and Blush Opera. The project proposal was selected for a two week development residency at the Joan Sutherland centre in Feb 2019. The initial proposal is to develop an electronic operatic performance work for two performers. 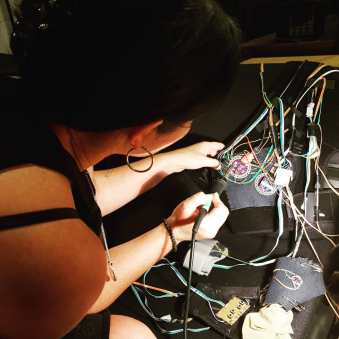 This piece intends to explore the dominant themes of puppetry and specifically the notion of control and interactions with the body and projection of the voice. The world of puppetry involves a complex hierarchy for the performers and also challenges audiences to consider who is causing what actions to happen, as in a traditional puppet show.

Our aim is to draw together the media of electronic music, and opera performance practice to consider how the musical and performative overlap can be structured in relation to the concept of puppetry. The artists will explore the use of wearable gestural controllers opening up a modern paradigm for the concept of the puppet, where the data from the movement of the bodies can be used in many ways to control the elements in the performance. The performers can control each other, their voice and the production of the sound and other media elements.

Some early testing of the wearables #1

Some early testing of the wearables #2

Read the following story on the Digital Marionette